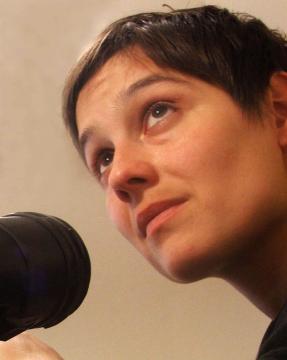 Why did you choose this interesting subject, between biodiversity and tradition, for your documentary?

A common view is that mankind is the enemy of nature, and whenever we talk about human impact on nature, we tend to think on the many ways people destroy it. However, we think, and our case study demonstrates that it is possible for people to live in harmony with nature. And the best living solution is traditional, non-mechanized farming. Non-mechanized farming, that is food production on the scale of animal and manpower allows the coexistence of high biodiversity and people. This situation can be observed in many parts of Transylvania, and it is a subject rarely showed on film so far. In the area where we live, traditional farming is low intensity farming, and species-rich hay meadows are at the basis of this culture. Through hard work done mainly by hand, people get in very close contact with nature and acquire very high levels of ecological knowledge. In our modern times, this becomes a rare thing and it is worth showing to the public.

How long did you shoot? Were there any problems? What were the most beautiful days/aspects of your journey/work?

We were shooting the film for two and half years with my husband, László. During the shooting and editing two of our children were born. This made the making of the film very difficult at some points, but we were lucky to receive help from family and friends. At almost every occasion when we went out shooting, we found something interesting. We started the shooting in winter, and right at our first field trip we met a short-eared owl, never before observed in the area of the filming. Although my husband studies fairy shrimps - these less than 2 cm long crustaceans - for more than a decade, we were amazed to see on screen  how colorful they are. When our second daughter was 5 weeks old we went out to film hay making at a distant mountain location, taking the baby and the 2 and half years old child with us. We planned to retreat in a village for the night but the car broke down in the evening, so we had to change plans and spend the night in a mountain hut.

Is important to pay careful attention to the aspects of nature to improve our world?

Nowadays nature films are part of everyday life of modern people, becoming a way of entertainment. It is important to show to people the beauty and vulnerability of nature, but this was told and shown many times before us. We want to go a little bit further: showing that living in harmony with nature is not an utopia, and good case studies are right in front of our eyes. Also that we don't need to travel to exotic places to see exotic nature and wildlife, at least not in Eastern Europe and especially Transylvania.

How many documentaries have you shot in your life? Which is the most important for you and why?

This is my first long documentary, so far I've made short films.

We plan to explore further the topic of traditional farming in the Carpathians. This life and especially hay making is so spectacular and so full of messages, and we want to capture more of this. There are other plans like filming fairy shrimps, a spectacular and endangered crustacean group that was shown briefly in the hay meadow film, and another on the grass frog that has spectacular spring migration through flooding streams. Luckily there are plenty of topics in the area where we live.

About eight years ago I participated at a film festival in France and a German filmmaker recommended me the Sondrio Festival, as a very good festival. Looking at the web site it seemed very interesting.

Do you know Valtellina and Sondrio, have you been here before?

I've never been in Valtellina and Sondrio before, and I'm very happy that I have the opportunity now.