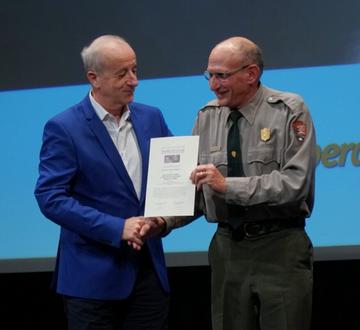 First prize, “Town of Sondrio” Award, to Islands in time – A wildlife odissey – Born of fire by Matt Hamilton, produced by Terra Mater Factual Studios in co-production with DocLights/Naturfilm and National Geographic Channel – Austria 2017.
As a result of two worlds colliding, the tropical islands north of Australia have the most extraordinarily diverse biota on earth. The merger of Asian and Australian influences over widely varying time scales has produced bizarre adaptations in the animals and plants living there. With some islands vastly older than others, species have had equally differing periods to evolve. Working under spectacularly difficult conditions, the film-makers show us the treasures of a world we’ve never seen and demonstrate the highest skill in nature film making.

Stelvio National Park Award to Wild Germany: Isar – The last wild river by Jürgen Eichinger, produced by Jürgen Eichinger Filmproduktion - Germany 2016.
In its higher reaches, the Isar is the last free wild river in southern Germany, with rich vegetation and virtually no human disturbances. The film-maker take us on a trip down the Isar emphasizing the river’s hydrology and the importance of riparian sediments and floral habitat to native bird and animal species.

Lombardy Region Award, for the best documentary that highlights the aspects of nature, culture, landscape and economy in protected areas within the European Union, to Wandering Wolves – Part 1 by Volker Schmidt-Sondermann, produced by ZDF – Germany 2016.
Wandering Wolves shows the challenges facing conservation of one of Europe’s most important top predators. The film dramatizes the over-land odyssey of two wolves crossing many nations and hundreds of kilometers. On their epic journeys the wolves encounter dangerous roads, wide rivers, and the many hazards of human settlements. The film shows that humans can live in harmony with wolves and that there is no need for us to fear them.

Students' jury Award to The silent death of lions by Axel Gomille, produced by ZDF - Germany 2015.
The Festival Scientific Committee proposed a selection of four documentaries that were entered but are not in competition: the focus was on research and projects for animal conservation. A group of selected students from two high schools in Sondrio viewed, evaluated and selected the film they liked best.