Giraffe. Up High And Personal- Interview to Herbert Ostwald 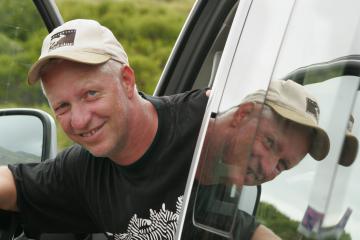 The director Herbert Ostwald tells us something about his work: Giraffe – Up High And Personal

Why did you choose these fascinating animals for your documentary?
There are two reasons: first, there are not many documentaries about these magnificent longnecks.  Wildlife filmmakers have overseen the tallest animal for long time. And that in spite the fact that giraffe have hundred percent sympathy  by the audience. So, why isn't there not any films? Maybe it is because giraffe do not fit into the 16 by 9 formate, maybe many producers thought giraffe are beautiful but boring. That was my second reason to do the film: i think giraffe are not boring. In fact they are very interesting social animals with a lot of surprising behavior.

How long did you stay in Africa to shoot your film?
We shot the giraffe documentary in 4 months in 4 different counties: Uganda, Kenya, Namibia and South Africa. We wanted to film our stars in different environments to show there fantastic adaption to harsh and challenging surroundings, not only in the savannah.

Were there any problems?
In general, giraffe, like most of other animals, do not read film scripts. So they often did not act like we have planned. Some group of giraffe were very shy and we had to be very cautious to follow them. So they sometimes forced us to overnight where they lived, in the middle of nowhere, where sandstorms and more than 40 degrees Celsius challenged the whole crew. And it took us some time to film the giraffe with a small noisy drone from they sky. First the animals mistook that machine with a bee swarm and run away. After some of  trials they calmed down and became very curious.

What were the most beautiful days/aspects of your journey/work?
Every day with giraffe is a beautiful day. Their peaceful lifestyle and beauty is a present for everybody in their surrounding. The most exciting event for me was the day of catching giraffe. When the researchers narcotized them and brought them to the ground, everybody's war urgently needed to hold the one ton animal down. I laid at the body, felt its powerful muscles, its warmth and its fur. To see that this giraffe came up again healthy and safe made me happy too.

What is the most particular and strange aspect in the life of giraffe?
I think  the most particular aspect in a  life of giraffe is living against the force of gravity. First, there is the challenging welcome to the world. A newborn giraffe falls two meters from the mother's body to the hard soil. Ouch. Second, the heart of a giraffe has to show an excellent performance to pressure the blood into the head.How many documentaries have you shot in your life?
I didn't count them, but I guess it have been around 30 wildlife documentaries in the last 15 years.

Are you specialized in african environment?
I lived six years in Kenya and did some films in Africa at this time. But I also directed films in Europe, Asia and North America.

What future projects for your work do you have?
We are just doing a documentary about the wolves in Germany. I will go back to Africa and will film one of the ugliest but most interesting rodents called Naked Mole Rats. And we will start a film about the short necked giraffe of Europe, the cows. By the way, very challenging like giraffe.