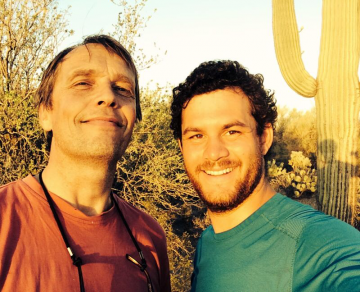 The director Yann Sochaczewski tells us something about his work, the documentary America’s National Parks: Saguaro

Mr Sochaczewski, Why did you choose this wonderful Park, Saguaro, for your documentary?

The documentary "America’s National Parks - Saguaro“ is part of a eight- part series portraying the beauty of US parks. 2016 is a big celebration in the US as the parks turn 100 years old.
National Geographic Channel came with the idea of creating a big series to celebrate this centennial to doclights/NDR Naturfilm, a German natural history film producer, a few years ago and they decided to work together on this project. We at Altayfilm were lucky to pick two of the parks we wanted to work in. As the Sonoran desert is a place that not many people now about, this was a great chance to create an intimate portray of this park and its super interesting inhabitants. The other park we worked in was Grand Canyon. Just a few hundred miles north of Saguaro - but totally different in scale.

What is the fifth season?
From June to August, temperature can rise over 45 degrees. Everything is totally dry and seemingly dead - until strong winds bring some tropical moisture from the Pacific. At first only a few drops of rain reach the hot desert ground, but shortly after heavy monsoon thunderstorm cells run all over Arizona. At some places the rainfall is so strong that they flood the desert. This monsoon season is called the „fifth season“.

How long did you stay in America to shoot your film?
The first trip to Arizona was in July 2011, the last in August 2014.

Were there any problems? What were the most beautiful days/aspects of your journey/work?
Filming in the heat, when temperature climb up to over 40 degrees is always demanding. The metal camera easily burns your hand…
Another great moment was when a roadrunner become my friend ;-) I lived in the outskirts of Tucson, Arizona for couple months and wanted to film roadrunners nesting and fighting rattlesnakes. But the birds can be very shy and it is not easy at all to find their nests. I have spend days searching for them in the desert with no success. After a while I
realized that I had a breeding couple around my house. So I decided to carry some bird-goodies with me all the time and every time I saw one of the birds I left a present on the ground to show him I am a good guy. A few weeks later the roadrunners knew me and one special day they even allowed me to follow them to their nest! :-)

How many documentaries have you shot in your life?
Saguaro was the first one I directed, or better to say co-directed together with Henry Mix. But I participated in many productions before as cameraman and field producer.

At the moment I am finishing a film about Ethiopian wolves for German, Austria, France and Scandinavian TV. Beside this we are working in Western Russia along the Volga River.

What do you think about Sondrio Festival?
Unfortunately I wasn’t lucky yet to visit this festival. I really hope to attend it next year. At least from photos it looks very picturesque and invites one to stay more than just the festival-days.