The sagebrush sea by Mark Dantzker 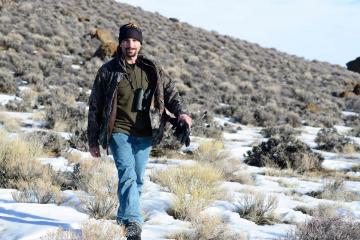 -Why did you choose this interesting and particular subject?

The species at the center of our film and our concern for the sagebrush sea ecosystem is the Greater Sage-grouse.  I have been working with sage grouse on and off for more than 20 years, during which their populations have continued to fall.  They are down by an estimated 95% from pre-settlement levels. There isn’t much regard for this ecosystem which many see as empty and barren, or for this bird who many see as a silly creature dancing preposterously in the desert.  Since there are resources out there in the land that people want — oil and gas under the ground, sparse grass to feed herds of livestock, green ribbons along streams where they can build homes —the sage grouse was seen as a fancy chicken dancing in the way of progress.  We felt we could help by making a film about the sage grouse and the sagebrush that raised regard and interest in the natural system.

- Despite its size, this veritable sea of sagebrush is a fragmented landscape with a tenuous future, why?

There still seems like a lot of sagebrush out west.  There’s still about 650,000 square kilometers.  That’s half of what was there, but still a lot of habitat.  Much of it looks intact, but in fact it is broken.  The landscape was transformed by cattle a hundred years ago when there were no regulations and it was truly the wild west.  They broke the ecosystem. Management of cattle has improved, and more recently researchers have developed ways to more sustainably ranch in many places, but we’ll never get back to where we were. The native grasses are much diminished and replaced by invasive that are adapted to burn, killing sagebrush and opening up more area for themselves. Then there are the extractive industries.  It might not look rice on the surface, but there are riches below ground in the form of coal, uranium, oil, and gas.  Where these industries go, there is no room for wildlife, and the habitat does not recover once they are gone.  And there’s the impact of population growth.  Even though the barren lands don’t have many homes, the thin meadows along the streams are popular for building homes.  These green meadows are critical for grouse, especially chicks, in the heat of the summer.  These are the big factors, but there are more little ones.  The result is insult upon injury to a species that is simply sensitive to compounding factors.

As the producer, I don’t get too many days of sitting still with a camera.  But those are my favorite days.  I spent two days filming the tiny Rock Wren nest, watching the parents delivering food every few minutes. And I spend 3 days in a cave filming the Raven scene. I grew to really love them. They are natural predators of the sage grouse, just doing their job in nature.  We’ve created so many new opportunities for them to nest, and food reserves (trash) for them to feed on, that there are far too many now and they can overwhelm the grouse populations.  But that’s no fault of their own and they are wonderful parents to watch work.

-What future projects for your work do you have?

We are first adapting our film for the classroom.  We are making very short films from the material to support specific lesson plans.  We need the next generation to grown up with an appreciation for the sagebrush sea, in order for it to survive long term.  But after that, I don’t know what’s next.  I’m going independent and it is much harder to make quality natural history films as an independent but I will continue to try.

-What do you think about Italy? And about Valtellina and Sondrio Festival?

We are so honored to be in your festival. I wish I could come but it is too expensive.  I would love to see Valtellina and Sondrio and hike the surrounding mountains. Maybe one day…