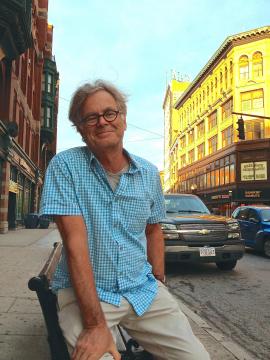 -Why did you choose this interesting subject?

I have the good fortune to make short films for the Goldman Environmental Prize (www.goldmanprize.org) about their annual prizewinners - one on each continent. Two years ago the Prizewinner for Asia was Azzam Alwash. The film is used at the awards ceremonies in San Francisco and Washington DC and then we take the six stories and compile a half hour tv program for PBS in the USA. We also submit the program to film festivals. In this case I wanted to expand the short 4 minute film into a piece specifically for film festivals.

-How long did you shoot your film?

We were in Iraq for a week filming.

Every day we woke before dawn and traveled out on to the marshes on a small boat to film. We would travel for hours each day and then take a break during the middle of the day for lunch. Then we returned again in the late afternoon for magic hour for more filming.  We travelled in different directions each day and I was constantly amazed at how rich and beautiful the place and the culture was. We come upon little settlements in the middle of the marshes that seemed like floating farms. Buffalo  swom around and settled on a clump of reeds to graze. Fishermen, hunters, and reed harvesters were going about their business in the marshes. Each day found myself in a state of awe when I would realize again that what were experiencing had been completely obliterated by Sadam Hussein. Were it not for Azzam's efforts, the rich, beautiful complex ecosystem and culture might have been lost forever.

-Which future projects for your work do you have?

I am currently working of a film called "Sea Change" that also came out of a Goldman Prizewinner's story. Ikal Angelei is a native of the Lake Turkana region in northern Kenya. She has been fighting tirelessly to try to protect the largest desert lake in the world and the half million indigenous people who depend on it for their food and water. The GIBE III Dam is being built on the Omo River in Ethiopia, and when it is in full operation, Lake Turkana's volume will drop by half and could be divided in two and possibly dry up forever.

-What do you think about Sondrio Festival?

I am excited to be part of it. We have tried previously to be in the festival and not succeeded so this is a big breakthrough for us. I hope that we can participate again in the future. I am trying to make it there this year but I'm not certain I can as the Goldman Prize annual story meeting is on November 7. I am still working on it.